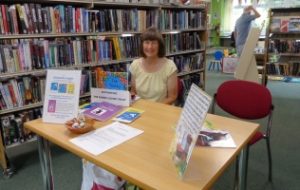 Waiting for the rush!

What a wonderful day I had at my local Library yesterday meeting the children who came in to sign up for the Summer Reading Challenge. The photo shows the calm before the storm. I had just set up, worksheet at the ready for the first to have a go at writing an Elfje.

A few minutes later the library was a hive of activity with plenty of children and their parents taking part in the various activities set up for them – including a treasure hunt organised by the Librarians which had them buzzing around the place like flies. Many still found the time to stop and talk to the four of us authors (Barbara Mitchelhill, Ann Scantlebury, Jeanie Mehta and me) and have a go at our activities too.

Most of the activity took place in the morning. Being a day when there was so much sport to enjoy on the television the afternoon proved to be rather quieter. Despite that it was a thoroughly enjoyable day and, if asked, I will happily do it again next year.