The Nursery class from my local Primary School will be visiting the Public Library on the morning of 9th March 2017 and I have been invited along to read my new children’s story book “The Thirsty Flowers.” There may also be time to read a few poems from my children’s collection “Barking at Nothing.” It promises to be a fun morning.

Elfje poems originated in Holland where they are used to teach young children about writing poetry. This is a form that I would like to see more widely recognised so I have started a new Blog called ‘Simply Elfje’. I am inviting submissions to the site so if you would like to find out more about the form and have a go for yourself follow the link. 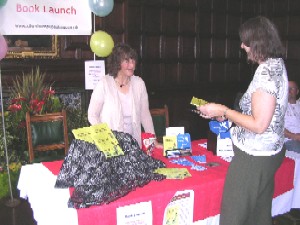 A select but appreciative audience came to hear Elizabeth Leaper read from her new book “Collecting Cobwebs, Gathering Brambles” at the Stafford Arts Festival and Book Fayre on 17th September. Throughout the day Elizabeth was available to sign copies of the book and an encouraging number of copies were sold along with several copies of her earlier book of verse for children “Barking At Nothing”.

Some dozen or so other Midlands authors were also in attendance, covering a wide variety of genres. These included award winning writer Catherine Cooper whose new book “Silver Hill”, third in the “Adventures of Jack Brenin” series which began with “The Golden Acorn”, will be available soon. For more information about Catherine and her books visit www.pengridion.co.uk

Elizabeth’s next book signing session will be in Nottingham on Saturday October 8th. Details to follow.

Elizabeth Leaper will be launching “Collecting Cobwebs, Gathering Brambles” at this event.  This is a collection of poems, rhymes and light verse by Elizabeth and her late uncle Jack Williamson. For more information about the book please see our Books page.  If you are in the area please come along. Joining Elizabeth to sign and read from their books will be several other Midlands authors, including Catherine Cooper, prize-winning writer of “The Golden Acorn”.